Late 1985, the then DG Nev Easton approached PP Ron Smith of the Rotary Club of Toowoomba West to be his special representative to form a breakfast club in Toowoomba. The sponsor Club would be the Rotary Club of Toowoomba. A planning meeting was held on the 6th January 1986 at Rotary House. Those present were Rotarians; Nev Easton, Harry Driver, Bert Townsend, Ross Arnold, Alvin Huth.

At the second planning meeting, on 14 February 1986, it was suggested that a minimum of 20 people was required to charter a new Rotary Club. It was resolved that 7:00 am in the morning was the best commencement time for the new club, and on the recommendation of Chairman Ron Smith, the 21st March 1986 was set as the date for the first inaugural meeting as a provisional Club.

It was decided that once numbers reached 20, an application was to be made to Rotary International to Charter the new Club. The official name was to be The Rotary Club of Toowoomba Garden City. The Charter occasion was held at the Range Motel on the 9 August 1986. The incoming executive was: • President - Noel Stephenson • Vice President – Doug Welshe • Secretary – Mel Becker • Treasurer- Peter McInnes • Sergeant- Keith Murdoch. Twenty-six new Club members, including Richard Smith and Syd Owen, received their Charter Member badges, a fine enrolment indeed. 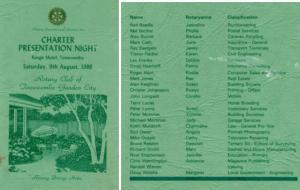